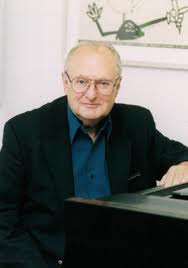 The Columbus Symphony presents 'The Satirist and the Philosopher', music by Mozart, Donald Harris and Richard Strauss, this weekend, 8 pm in the Ohio Theater. Jean-Marie Zeitouni conducts.

I think we are generally wired to tonality, to musical consonance. Listen to the German romantics, Schumann and Brahms-go back to Mozart (live with Mozart.) The journey is sublime. The destination is almost predictable for those steeped in this music.

Donald Harris's music is different. The process-playing the notes-is the journey. Not only because his music-alas-is not better known and many of us are hearing it for the first time. Donald used the 12 tone method early in his career. Music depending on patterns and repetition, as does all Western music, becomes more challenging through dissonances and especially since we have no way to predict where this music is going.

NEWS FLASH: I just heard this symphony in rehearsal. It is a knockout and a wow.


Wagner got there first with Tristan und Isolde. (Gesualdo and Monteverdi were writing unpredictable music four hundred years earlier.) Wagner set the sex act to music in Tristan, (yes he did) and only at the end of a four hour opera is there a tragic and magnificent....arrival. Relief.

This weekend the Columbus Symphony presents the world premiere of Donald Harris' Second Symphony. Thus I haven't heard it and neither have you. He tells me the work can be astringent, but as a composer, Harris values creativity, and a 'spark' above all else. This is a composer who "caressed every note, and he felt liberated to compose freely in a style of his own choosing after an unremarkable start with Nadia Boulanger."

Donald Harris' Second Symphony has its world premiere this weekend. Jean-Marie Zeitouni conducts the Columbus Symphony in the Ohio Theater.

The concert on Saturday April 14 is broadcast live on Classical 101 FM or www.wosu.org/classical101. 8 PM. Dr. Harris will be on hand for pre-concert talks and for intermission commentary.

Meanwhile, here's the intro to a wonderful film about Donald Harris' many journeys as a composer. The centerpiece is an early work of his, the Piano Sonata 2, as performed by David Belivasky

Donald Harris is Emeritus Professor of Music at The Ohio State University. He lived in Paris form 1954 to 1968. On return to the States he taught and and served as an administrator at the New England Conservatory and the Hartt College of Music. He remains a vigorous composer, and a beloved teacher, mentor and friend.

The Harris symphony is part of a program called 'The Satirist and the Philosopher.


The Strauss is best known today for its first ninety seconds, as used by Stanley Kubrick in 2001: Space Odyssey. Many of us of a certain age 'zoned out' to this opening fanfare back in the day. Did you? Do they still?

Richard Strauss was an early devotee of Wagner, to his father's chagrin. Papa Strauss was a horn player in the Munich court orchestra. He would make it a point to turn his chair around and present his back to the audience whenever Wagner was invited to conduct.

The younger Strauss was wise in his rebellion. He continued Wagner's adventuresome tonality and epic use of the orchestra in his tone poems. These are one movement orchestral works with a program. Wagner inspired the young Strauss to absorb Nietzche-the ideal of the Uebermensch and man's dependence on nothing but himself. Of his novel Thus Spake Zarathustra (Sarastro in Mozart's Magic Flute) Nietzche tells us

"Zarathustra was the first to consider the fight of god and evil as the very wheel in the machinery of things: the transposition of morality into the metaphysical realm, as a force, cause and end it itself, is his work. ..Zarathustra created this most calamitous error, morality; consequently he must also be the first to recognize it. His doctrine...posits truth as the highest virtue: this means the opposite of the idealist who flees from realty....The self-overcoming of morality, out of truth; the self-overcoming of the moralist, into his opposite--into me--that is what the name of Zarathustra means in my mouth."

I always thought of Strauss as a rather placid man, writing his music and counting his money. Even Strauss admitted the impossibility of expressing philosophy in music, but he did provide us with a mighty tone poem, filled with drama and variety. It has its bombastic moments, but never at the expense of the invitation to savor and exult, if not exactly ponder.

P.S., As to who is the satirist and who the philosopher....guess. Or not.
Posted by Christopher Purdy at 11:37 AM