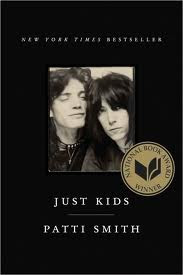 La boheme, with its description of student poverty and fatal illness amid the rooftops of Paris is only romantic and beautiful because of Puccini's music. It may be true that a lot of us keep a fond memory of our basement apartments and hopeless love affairs from a time gone by, but who really wants to turn back the clock? Poet-Rocker Patti Smith does just that with her book Just Kids. This was the National Book Award Winner and gave new profile to an artist I knew best from Gilda Radner's SNL riff in the '70s as "Candy Slice". ("Let's get together....and get sick!")

The center of this book is Smith's long relationship with the photographer Robert Mapplethorpe. They began as nice kids from suburbia. Mapplethorpe was an altar boy from a devout Catholic family. They met and connected in New York. Patti was on a blind date that was not going well. A young man walked by and she managed to whisper, "Hey, pretend you're a friend and help me get out of here." Robert did. And for several years, the two were inseparable.

These years, late 60s, early 70s, were years of homelessness-sleeping on front stoops in Brooklyn, panhandling and squats. They were years when two people were struggling to create: poetry and pictures-which morphed into music and photography. The days of controversy over Mapplethorpe's photography ("Piss Christ") postdate this book. This is a memoir about becoming. Along the way they live in New York's seedy and wonderful Chelsea Hotel (Virgil Thomson upstairs and Martha Graham down the hall) and we frequent the adjacent El Quixote or Max's Kansas City. Janis Joplin and Andy Warhol and his coterie make regular appearances. But the book is about Patti and Robert, friends, soul mates (overused but there's no better word here) lovers. They are two people who can't live without each other until sucess and sexualty separate them. Both get to the top of their fields, but there is no ego in this book .The tone is of truth telling. There's nothing sensational in this writing of two lives that were, frankly sensational.

At night, after trudging through the snow I found him waiting for me in our apartment, ready to rub my hands to make them warm. He seemed always in motion, heating water on the stove, unlacing my boots, hanging up my coat, always with one eye on the drawing he was working on. He would stop for a moment if he noticed something. Most of the time, it seemed as if the piece was fully formed in his mind. He was not one for improvising. It was more a question of executing something he saw in a flash.


Patti's album Horses-for which Mapplethorpe did the photography- launched her career. Mapplethorpe found a patron and created the images that disturb many to this day. Patti Smith married in 1980 and had two children. Robert Mapplethorpe died in 1989 at the age of 43. Don't miss Just Kids. It's poignant and moving and sad and lovely.
Posted by Christopher Purdy at 9:18 AM