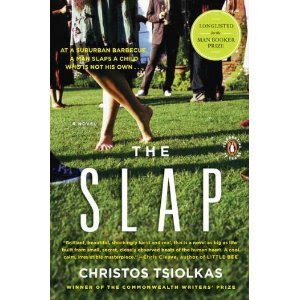 It's still too early to assemble a "Best of" for 2010. You never know what there is to read, see and hear over the next six weeks. I suspect however, that no book I read in 2010 will impress me more than THE SLAP by Christos Tsiolkas

A three year old boy is slapped by an adult male-not his father, not a relative-during a backyard barbecue in suburban Melbourne. Hugo, the little boy is clearly a terror. He's been given few boundaries and neither parent rushes to intervene when he begins to swing a baseball bad around in a bid for attention, coming within inches of creaming anyone in his path. So he is slapped and stopped. And then begins the consternation.

Sides have to be chosen. Fractured marriages are examined, healed and perhaps fractured again. Teen age angst is seen to be dangerous and pervasive. Older generations of the Greek-Australian community profiled in this novel are seen as both concerned and intolerant. Hugo's parents need to live in rage to make sense their crumbling lives. Dad is underachieving, angry, and alcoholic. Mom hasn't a clue. Both contribute to the sense of entitlement wrecking kids today. Trust me, back in the day if I or any of my little friends misbehaved more than one adult neighbor would be there to wack us into line. Nobody said a word abut it. It was a way of looking out for one another's children. And Hugo is by no means beaten or abused. He is slapped, once. And he stops with the baseball bat.

Hector, at whose home the slap is delivered by his cousin, Harry, is a successful businessman married to a ravishing veterinarian-and they too live a life pasted together. In the novel's second sentence Hector rolls over in bed and emits "a victorious fart" thus alerting the reader to pages of raw language. Bodily functions, sex, sexuality, drug use, you name it, the authors views and depictions are unsparing. This book is not for the squeamish. But as you blow through you are never (or I wasn't) temped to yell TMI! (too much information!) It's a "can't put it down" book and I was very sorry to see it end. Many novels lose the thread and limp toward the finish. My God, not here. Young Richie has an encounter with Hector a few pages before the end that is moving and gripping and never descends to vulgarity or falsehood. In fact, there's not a false note anywhere in this book. You may dislike these people and you may be repelled by lifestyles and conversations (a dose of racism) but unless you are locked away in a convent this book will ring true. In Ohio, in Boston, in Australia and on top of Mt Everest.

Don't miss The Slap by Christos Tsiolkas.
Posted by Christopher Purdy at 2:55 PM

Email ThisBlogThis!Share to TwitterShare to FacebookShare to Pinterest
Labels: All Sides Weekend, Kassie Rose, The Longest Chapter, The Slap, Tsiolkas