A Crush on Lady Antonia Fraser 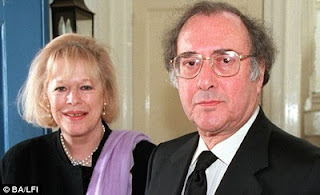 I had a crush on Lady Antonia Fraser when I was twelve years old. (Who was YOUR crush at that age?) A friend recently likened Lady Antonia, now pushing 80, to Becky Sharp. Back in 1969 I didn't know from Becky and wasn't very sharp myself. But there she was, the blond, sexy, titled author of 'Mary, Queen of Scots' and made that doomed lady a major bestseller for the first time since 1587! We come to find out that Lady Antonia-daughter of an Earl, thankyouvery much, whose mother was Queen Victoria's biographer, was married to a member of parliament and had six kids! She did the Dick Cavett-David frost route of 'chat' shows stateside and a fair amount of magazine spreads. She was hi-glam. I wrote her a fan letter. I did that too much. She wrote me back, very sweet, from a tony London address. If you grew up on Route 2A then Campden Hill Square sounded pretty posh.

Many books later, from murder mysteries to nuns to royal biographies to Marie Antoinette sold to Sofia Coppola for the movies (Kirsten Dunst, yet) Lady Antonia has written a memoir of her marriage to the late Harold Pinter. It was for Pinter, playwright, master of pause and all around theater genius that Lady Antonia left MP husband and Campden Hill Square...briefly enough in the case of the latter. She lived with Pinter for over thirty years and they were married for 28, up until his death two years ago. 'Must You Go' is a poignant love story. It seems the path TO the relationship was complicated, but the marriage itself sounds blissful. Pinter liked the kids. Antonia supported his work and remained his biggest fan. Was he hers? It would appear so. Lady Antonia writes about love without whining. There are journeys throughout Europe and the States, the decline of elderly parents, and the world descending into Thacherism. I know very little about Harold Pinter save for a performance of 'Betrayal' on Broadway and an obsession with Meryl Streep in The French Lieutenant's Woman. But I mourned his loss through his wife's lovely book. The changing scenery, from Scotland to Venice helped. So did Lady A's witty prose and elegant, clipped observations. The first Mrs. Pinter, actress Vivien Merchant, is given her due for acting talent, with plenty lefty unsaid. The kids are messy teenagers when that's appropriate. Lady A is fond of Pinter's only child, Daniel. She chats up Jackie O and parties and once rented her London home to the young Caroline Kennedy (I'm Caroline's age. If she's no longer young, what does that make me?) Bomb scares, actual explosions and lousy reviews from the Times of two continents are mentioned and dispatched. Get on with it. Get on with this book, Must You Go? There's more than one way to have a successful marriage, and Lady A shares hers beautifully.
Posted by Christopher Purdy at 1:29 PM