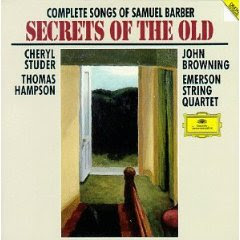 This is Samuel Barber's 100th birthday. He died in 1981. His was a long career and his was the career of creativity in classical music in America. In American music. Meaning that, to me, while he embraced his predecessors, like Ravel and Satie, like Brahms and Stravinsky, he didn't need them. Barber brought a European sophistication to an American-democratic "get out there and do it because ain't nobody gonna do it for you" ethos. Virgil Thomson used the French models in music often to snobbish ends, to parse down his audiences. Barber, who at firs could be less listener friendly, did the opposite. He used dance, rhythm and texture to draw people in. Barbe's music lifts up. A good example of this is the warmth of his violin concerto. It does without a lot of slash and burn until the final movement, the "perpetual motion' composed to satisfy the commission-people wanted show off for show off sake and I don't think Barber knew how to do that.

The world knows Samuel Barber for his Adagio for Strings. It's said that Toscanini encouraged the young composer to orchestrate part of his String Quartet-hence the Adagio, which the Italian conductor pronounced 'semplice e bella" Simple and beautiful. Indeed. Barber worked well in several genres. I'm especially partial to his songs, and to his three short choral pieces 'Reincarnations' to poetry by James Stephens. I like his opera 'Vanessa' very much, and I really admire 'Antony and Cleopatra'. The failure of this work, written to open the Metropolitan Opera House in 1966, ruined Samuel Barber's life. He lived another fifteen years but his productivity fell off, and he grappled with alcoholism and depression. Still, the composer of the Adagio, of Hermit Songs, The Essays for Orchestra, a 1961 Piano Concerto written for John Browning and the opening Lincoln Center-the composer of the sublime Knoxville, Summer of 1915 and the very grand Antony and Cleopatra, this composer, Samuel Barber, deserves a statue. Better yet, more and more performances! Don't just sit there. Go to youtube and type in his name. Listen (watch) Enjoy.
Posted by Christopher Purdy at 3:00 PM