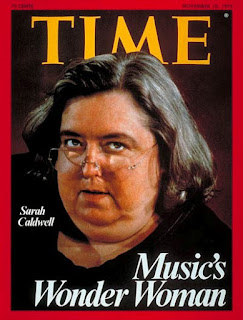 It never occurred to me that Sarah Caldwell would die and I doubt it occurred to her either.

Sarah was the first woman to conduct at the Metropolitan Opera (1975).
She was the founder and artistic director of the Opera Company of  Boston (1958-1990).
She had no theatre to call her own. She staged operas in hockey rinks, in a cyclorama building in a seedy part of Boston, she staged operas in an outdoor flower market, and later made do with an abandoned movie house with sticky floors and you don't want to know the rest.

Out of nothing, on a stage no more than thirty feet deep, with half the floorboards missing, Sarah staged-brilliantly-and conducted-poorly-the American stage premiere of Hector Berlioz's Les Troyens-an operatic retelling of the Trojan War deemed unperformable because of its length and scenic demands by Berlioz himself. Sarah did the whole thing, complete with Trojan horse. I was a teen aged chorister and one of several who popped out of the horse's rear end to cry 'Italie! Italie' and hurl myself onto a nest of Athenian maidens. Two of them had been classroom teachers in Lexington, Mass.,  so it got a little awkward. Sarah's production of War and Peace had you honest to God believing yourself in the grandest ballroom in St. Petersburg or the most desolate steppe in all Russia. Napoleon himself-the wonderful late Donald Gramm-strutted across the creaking stage, two cannon from the local army base museum following him. Sarah's producing of Don Quichotte came complete with windmill, which Don Quixote himself, a wonderful 7 foot basso called Noel Tyl, rode fearlessly.

Sarah gave the American premiere of Verdi's five act french version of Don Carlos, complete with-lamentable-ballet-and you weren't in a theater on the edge of Boston's combat zone, you were in Imperial Spain five hundred years ago, a dangerous place ruled by an unforgiving church.

How did she do all this? As to assembling the actual productions I don't know.
She only rehearsed at night, leaving off at around 6 a.m. She lived on coffee, donuts and burgers and had the 300 lb girth to show for it.

Her stage directions were simple and clear. Her rehearsal techniques were a disaster and her administrative gifts non existent. Boston Edison shut the power off before more than one opening night, but on would go the lights and somehow, magic happened. It really was a miracle. 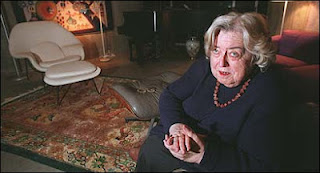 Sarah never understood the word NO. Lack of funds, hurt feelings, ethics, whatever were little part of her. She would have found a way to stage 'strategic planning' to Berio or Shostakovitch but she'd make no other sense of such concepts. She was the show, hers was the vision and even today there are bodies for miles. But at least she HAD a vision, and everything she did as an artist came exactly from the score.
I'm glad I no longer have to work for her. I'm sorry the company self destructed and closed in 1990.
When it was great it was great.

Sarah 's up moving around the clouds in heaven and probably dodging her creditors, God bless her.
Posted by Christopher Purdy at 2:02 PM