RICHARD TUCKER AND RENATA TEBALDI in 1970 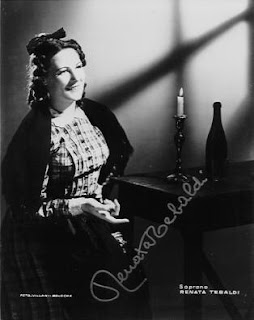 I have a lot of broadcasts of Tucker and Tebaldi together; thrilling performances of Manon Lescaut, Andrea Chenier and Tosca among them.


I've been listening to a La boheme, broadcast from the Met in April, 1970.
This was towards the end of Tebaldi's career-she was done by 1973.
Tucker was always in prime voice. When he bothered to sing and not bellow he was wonderful. I remember hearing this broadcast as a kid. I taped it on a battery operated reel to reel tape recorder off of a transistor radio. The old tapes are probably still in my uncle's basement in Arlington, Mass.
And you know what kills me? Two days after this broadcast Tebaldi sang Mimi in Boston with my favorite tenor: Carlo Bergonzi. I could have gone. Good seats were $5! 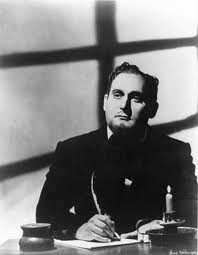 Tebaldi finds a lot of Act III rough sledding by 1970-and she was younger than I am now-but for sometimes the years fall away and you can hear a lot of the old velvet. There are plenty of broadcasts of Tebaldi in her absolute prime (1950s) and this is not one of them, but this late performance I find very moving. I sometimes find Tucker hard to take, though his vocie never fails him for a second. What I love is how he really listens to Teblaldi and molds his singing to her so musically. I wish all young singers would listen to this and pay attention.

Tebaldi and Tucker may never have looked like starving Bohemians but together in 1970 they ARE music.

It's nice to think of them both in heaven, sap that I am.
Posted by Christopher Purdy at 3:15 PM

I saw a video of them performing the end of the first act of Boheme I think (the 2 arias and O suave fanciulla), but it was in black and white and I think in the early 60's or late 50's. It was so wonderful... such artistry in their performances. I think this same video had another clip of him singing "Vesti la giubba" as well and he was just great. I wish I could find that video... let me know if you are aware of the title of it... there were tons of GREAT scenes by the greatest performers. I also remember a performance of a russian scene - it must have been Boris Guytenov (oops?) that was one of the most moving things I've ever seen on video. Keep blogging...I love this site.