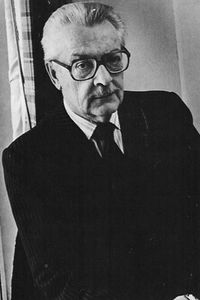 Richard Mohr was one of those people you knew even if you didn't know you knew him.
Walk over to your CD collection. Notice any complete opera recordings from RCA Red Seal? Do you have Il trovatore with Jussi Bjoerling and Zinka Milanov? Do you have Aida with Leontyne Price, Jon Vickers and Rita Gorr? What about the intimate Madama Butterfly with Anna Moffo and Cesare Valletti? Salome with Montserrat Caballe and Sherrill Milnes? If you have any RCA classical vocal recording made between 1950 and 1976 then you have the work of Richard Mohr.

Richard produced the recordings for RCA from the days of Toscanini and the NBC Symphony to the mid 1970s. He contracted the artists, wrote and changed (and changed) the rehearsal and recording schedules, supervised each take, and edited the final product. It was in his later years, as producer of the intermission features for the Metropolitan Opera broadcasts, that listeners regularly heard his name. He was a self effacing man but even so the chance to interview his beloved Zinka Milanov and her colleagues was too good to resist. It was Richard who told quiz panelists when to speak up and when to shut up (he had flash cards for that). It was Richard Mohr who sifted through the bags of quiz questions. It was Richard who would glare at us quiz panelists thirty seconds before air time and say, "pithy and to the point!" An yes, it was Richard who could tell whopping stories about his colleagues in music business from days gone by.

He had his favorites form the RCA days. Erich Leinsdorf was not one of them, but that conductor led some of Richard's best work: Madama Butterfly with Leontyne Price and Richard Tucker, The barber of Seville with Cesare Valletti, Robert Merrill and Roberta Peters, Tosca with Zinka Milanov, Jussi Bjoerling and Leonard warren, and an infamous Lohengrin, made in Boston's symphony Hall in the late 1960s. I say infamous because the cost overruns for this recording broke the bank. But I'm one of many who welcomed the CD release of this performance a few years back. Who wouldn't love the Boston Symphony playing Wagner in Symphony Hall, with the golden voiced Sandor Konya in his most famous role?

Richard worked on many of Toscanini's broadcasts and recordings from the acoustically challenged Studio 8-H in Rockefeller Center. When asked if Toscanini really was so ferocious he said, "Not at all. He was a pussycat." He remembered that Toscanini loved the gadgetry of recordings. He would insist on playback and cry "louder! louder!". But Maestro, said Richard. If we play it any louder we'll break the machinery. "Den-a BREAK da machinery!' roared the pussycat.

But if Toscanini was a pussycat, Richard told me that Stokowski-old Stokie he called him-had "the best ears in the business". He also admired Charles Munch and the Boston Symphony of the late 1950s. Richard produced the wonderful original cast recording of Samuel Barber's Vanessa with Eleanor Steber-she was another favorite-Nicolai Gedda and Rosalind Elias. There was not one area of the classical music business, and it was both art and business, that Richard didn't know.

I met Richard Mohr after his RCA days, but I had worn out more than once copy of that Madama Butterfly with Moffo-and the Rigoletto with Leonard Warren, and Rise Stevens's Carmen. We met at an RCA "do" given to celebrate the Metropolitan Opera's centennial back in 1983. I attended as a lowly record salesman, working my way through grad school. Richard attended as the former boss of the other guests: Milanov, Merrill, Hines, Steber, Albanese and Munsel among them. He didn't ask my name. He just said, "You look like you're under 100 years old, why don't you come on my opera quiz?" I sail okay-what would you have said?-and a year later there I was. Alberta Masiello, assistant conductor of the Metropolitan Opera, Father Owen Lee, writer and distinguished professor of classics, and Christopher Purdy who sells records in Rockefeller Center. I was embarrassed but Richard was a mensch.

I've thought of him a lot since his death a few years ago. You may never have met him-and boy, did you miss something, but listen to any great RCA recording, and think of Richard Mohr.
Posted by Christopher Purdy at 10:25 AM