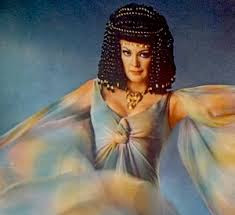 As I continue my rush into decrepitude, I enjoy looking back and using opera recordings to cite benchmarks in my life.

I can find no such benchmark for the RCA Red Seal production of  Massenet's Thais, recorded in London in 1973 and published as a three LP set a year later.

What I do remember is the exhaustive PR campaign surrounding this release and the incredulity once the recording was released.

Thais has a luscious high calorie score by French composer, bon vivant and amour des femmes  Jules Massenet (1842-1912). It's based on a novel by the same title Anatole
France, published in 1890.

A grande horizontale, a courtesan in first century C.E. Alexandria is rescued from her life of debauchery and spirited away to a convent in the desert by a crazed holy man called Athanael. There she dies peacefully, with vision of the deity and his/her angels while Athanael orgiastic ally confesses his own lust for her. Curtain.

What's not to love? We have Massenet with his velvet jackets, sophisticated tunes and atelier complete with sopranos Sybil Sanderson (from Sacramento, California) and Mary Garden (Aberdeen out of Chicopee, Massachusetts). Sybil became a celebrated Manon and created Massenet's Esclarmonde.

Thais was also a vehicle for La Sanderson, known for her dazzling upper range. F above high C was her party note. She was a beauty, and Thais fit with her reputation for gambling, booze and morphine. Sybil succumbed to all of these at the age of 38. Mary Garden, who thought Massenet made love like a slob, lived into her 90s.

In my youth this was an onstage vehicle for Beverly Sills in late career.  It was a mistake.  The lady retained her stunning coloratura but by the late 1970s the long, elegant lines Massenet required were a memory.

Beverly got there second. Thais had lived on the edge of the repertoire and no closer for a generation leading up to the 1970s. It was then that RCA decided Anatole France's whore-nun was the perfect vehicle for American soprano Anna Moffo.


To be fair, Anna Moffo (1932-2006) had been a star for RCA Red Seal since the late 1950s. Check out her recordings of Rigoletto, La traviata, Lucia di Lammermoor, Luisa Miller and La rondine and you'll hear lots to enjoy. She was a gorgeous woman. That's not much help on records, but Moffo recorded sexy. Her physical charms and dramatic gifts made her an audience favorite. Anna Moffo was the real deal.

In the late 1960s there was a high profile divorce and a very high profile courtship and marriage to Robert Sarnoff of the RCA family. Wags suggested that this marriage was responsible for the spate of Moffo recordings dating from this period, as her voice rapidly eroded.

RCAs production of Thais meant to be a spectacular come back for a much loved diva in distress. How could this lose? If the lady needed careful editing, she'd get it. The rest of the cast was magnificent. The French baritone Gabriel Bacquier lent authenticity and a fine voice. Jose Carreras had a supporting role in this, this first major recording. The golden honey of that voice was a joy. Justino Diaz, still quite young but no slouch himself was cast along with an authoritative conductor,  Julius Rudel. The maestro's production of Massenet's Manon with Beverly Sills remained a top tourist attraction in New York into the 1970s.

What happened? Magazines, newspapers and billboards everywhere carried a full length portrait of Anna Moffo in harem pants and Cleopatra wig hailing l'essence de Thais! RCA had her on the Merv Griffin-Mike Douglas talk show circuit. She flashed her engagement ring with its Volkswagen sized diamond. She was still lovely and everyone still loved her. There was little talk about Thais, or Massenet, or music, or opera (that's a shame, Anna Moffo was a Curtis trained musician) There were plenty of cheesecake photos, with a somewhat jowl-y lady. It wasn't even camp. It was tragic. And it was everywhere.

After the exhaustive and ridiculous PR campaign, RCA's recording of Thais, starring Anna Moffo, Gabriel Bacquier, Jose Carreras and Justino Diaz, conducted by Julius Rudel, was published with lurid cover art intact (To be fair the back of the  LP box had Miss Moffo costumed as a nun).

Eventually you had to listen to the records. The press was unmerciful. The PR assaults couldn't save a recording with a heroine whose performance was pieced together in bits of tape and over dubs. She crooned, she sighed and she shrieked. She rarely sang. The men were wonderful. But Thais with no soprano was like kissing your sister. This recording was not going to get you laid. Callas could get you laid. Tebaldi and Corelli could get you laid.  RCA's tug rag art stimulated no one..

Now in 2017, eleven years after her death, Anna Moffo's recording of Thais has been digitized for the first time and is back in circulation. The RCA catalog has reverted to SONY. I suspect no one at SONY has any idea of the history, controversy and sorrow of this recording. I'm sure its been digitally remastered and sounds better than ever. We can only hope the labored, desperate singing does not sound better than ever. Amazon calls this Moffo's "controversial" recording and adds, "Perhaps its time for a reassessment?"

I'm going to buy this. Even after all "that". I began to understand show business and fun house mirrors when this LP was new. The men sound great. Rudel was a wonderful conductor. I like Thais.
I've always loved Anna Moffo, a crush of my callow young manhood. Mowing lawn money bought me her recording of Madama Butterfly. She's in heaven now, hopefully forgiving us all for listening to Thais, and for even enjoying it.
Posted by Christopher Purdy at 3:36 PM