Columbus Symphony: What do we do about Carl Orff?

Rossen Milanov will conduct with his usual skill, charisma and energy. Bring towels. These will be hot nights in Columbus.


This humble writer (!) gives pre-concert talks one hour before every CSO Classical season performance.Come in early and (hopefully) enjoy.

"In the case of Carl Orff we are not at all dealing with an atonal talent.  On the contrary, his Carmina Burana exhibits exquisite beauty, and if we could get him to do something about his lyrics, his music would certainly be very promising. I shall send for him at the next possible opportunity."

Goebbels was late getting on the Carmina bus. The cantata was seven years old by then. It had a sensational series of performances in 1940 conducted by Karl Bohm, and a triumph at La Scala, Milan in 1942. Carmina Burana was a hit from its very first performance, and remains so today.

In fact, Carmina Burana was hardly admired following the s1937 premiere in Frankfurt. Volkische Beobachter, the Nazi newspaper-soon to be the only newspaper-called the work "Bavarian niggermusik. Even the Third Reich couldn't stop the wild popularity of Orff's new cantata, based on the satirical writings of 12th century students rebelling against the church.

Orff's name is not often added to the top artists who remained in Nazi Germany: Elisabeth Schwarzkopf, soprano,  not only benefited but dismissed charges of collaboration as "Nothing, like being in a labor union." She acted as an informant on her colleagues at the Deutch Oper Berlin. Herbert von Karajan also had Goebbels as a fan, who crowned him, "Das wunder Karajan", the miracle Karajan. Wilhelm Furtwaengler didn't need the Nazis to promote his fame. He was older, well established and a conductor of the finest order.  Richard  Strauss stayed in Nazi Germany, and accepted a post from the Third Reich.Wags like to say he was protecting his copyright. He also had a daughter in law with Jewish relatives, and did keep her safe.

In preparing talk on Carmina Burana for the Columbus symphony, I'm at a loss of how much time I should spend on Carl Orff in Nazi Germany. The composer was born in Munich in 1895, By 1944 he was hardly a dilettante.  Earlier he had distinguished himself by raiding long forgotten cupboards of Italian and German music from the 15th and 126th century, often re-working them to suit 20th century audiences. It's largely because of Orff that we know the music of Monteverdi today.

In addition to CarminaBurana, he had prepared a follow-up work, Cartulli Carmina ad  would go on to produce Trionfo d'Afrodite. 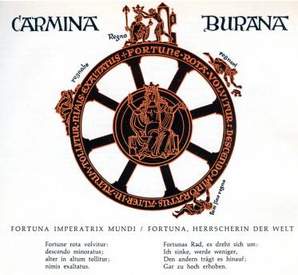 Schulwerk, Orff's comprehensive study on music education was published in 1949. Its tenants are in use today. His work inmusic educaiton, and his founding of a new school in Berlin in 1924 may be Orff's most important legacy.

What's surprising was getting this work past the Nazi censors. One imagines they were too stupid to recognize the alt deutch Orff was using, not to mention Latin and lapses into the Provencal of the troubadours.  These are the people who thought jazz was entarete musik (degenerate music) What did they make of Orff's driving rhythms and  texts leaving little to the imagination:


So successful was Carmina Burana with the public that the Nazi propaganda machinery decided an all out battle wasn't worth it. There was fear that people would seek out broadcast performances from elsewhere.

Orff never left Nazi Germany. His career thrived. His work in music education has taught generations of children all over the world. It seems as if Carmina Burana is being performed somewhere every five minutes. Not so the rest of Orff's oeuvre. These indulged his romantic attachment to ancient music, and lack the gut level appeal of Carmina Burana. The closest parallel might be Wagner's Tristan und Isolde, but Carmina is more fun. Orff may have been too clever for the regime.

Orff quaked during the de Nazificaiton tribunals immediately post war. He made much out of an acquaintanceship  with Kurt Huber, executed by the Nazis in 1943 as a member of the White Rose resistance. In fact, Frau Huber maintained for decades that Orff did nothing to help her husband once he had been arrested. "I would be ruined!".

Indeed he would have. Those of us lucky to have never experienced a criminal regime can't judge others for their behavior. Orff's place in music is guaranteed by Carmina Burana.The same work alienates many, among them conductor Edo  de Waart. In a lecture years ago, I  remember de Waart telling us that O Fortuna was the sign on/sign-off music for Radio Amsterdam during the Nazi occupation. He dismissed the work as "that Nazi music."

Still, Orff knew what he was doing. The combination of rhythm,volume and debauchery makes Carmina Burana irresistible wherever its performed.

Posted by Christopher Purdy at 12:12 PM