My script for Twisted began with thumbnail stories of the operas and kudos to each organization: Ballet, Symphony, Opera...and their Artistic consciences: Peggy, Edwaard, Peter. I thought, what could be better and how in the hell is this going to work with these scenes sung, played and danced. I was gently told my script was no good. Then some rehearsal footage-pardon the pun-was made available to me. I saw beautiful people dancing beautifully but did not know how to connect this with what Mozart, Puccini, Bizet et al and their librettists wrote.

There is no way. That's the point! Three art forms have coalesced to make something...else. Something new and beautiful. Audience may be not get it at first but stick around. Mozart will always work his magic, but Mozart danced and sung will create an extra dimension of beauty. So it will be for the entire program. Trust me. I want people to leave the theater with full hearts saying "Only in Columbus..."

Yesterday I was asked to walk the entrances and exits and continue a bit of work with our Don Giovanni. This shouldn't be complicated on the nights (!) What worries me is the need for memorization. I had despaired of being expected to read the script from a music stand, $2 readers firmly clasped on. We all know that wouldn't work-and I'm not going to be in one place all the time. So memorizing the new script (they like this one) it will be. I get to escort a lady from the audience, chat up a singer I love and flirt with two Carmens (not one but two Carmens!)

There's a young woman among the singers, striking looking with a luscious voice. I told her does anyone tell you you look like Maria Ewing...She said you're the fifth one today! She has more voice than Maria Ewing did, talented as she was. 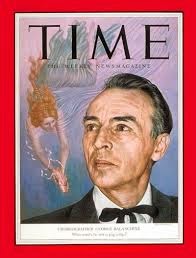 Edwaard told the singers, in your movements on stage show us what is going on with you. With YOU. Become yourself. And don't be afraid to change every performance. Nobody feels the same all  the time. Why should the audience?


I told Edwaard that thirty years ago a buddy and I crashed Balanchine's funeral, at the Russian Cathedral on E. 93 St. in New York. Edwaard told of a dancer he knew who kept a piece of lasagna in her freezer. Balanchine had eaten a bit of it. So every year this dancer would shave off a touch of this lasagna and eat it. Balanchine's lasagna. You gotta love the arts.
Posted by Christopher Purdy at 8:52 AM