At the Circus and Pagliacci

Every year I'm invited to accompany bus loads of children from the Ohio school for the Blind as they go to the circus. The kids wear headsets and I narrate the circus to them. It's a wonderful exercise for me, finding a way to describe 'orange' or 'clown' or 'trapeze' to some of these kids who have never had sight.Others are developmentally disabled and blind. The trip is financed by some lovely people, retirees from what used to be the Bell System. I look forward to this every year. 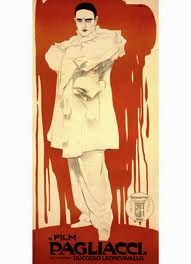 Last Thursday was the day. I got to thinking as I sat there, doing my best to help the kids have  blast. This year the circus was both horribly loud and horrible horrible. I worry for any family paying good money to bring the kids to see such drek. They wheeled out some tigers-awful to see such magnificent animals in captivity-and there they sat three looking bored and were wheeled off. There was an elderly tired elephant with a stupid outfit. The acrobats posed and believe me they weren't much to look at. The clowns were relentless and truly stupid rather than being truly funny. The arena was filled with screaming kids happy to be out of school. My kids were bewildered. I did my best but this year especially it was so LOUD....

I've been asked to direct Leoncavallo's opera Pagliacci  ("Clowns")  this summer. Most of you know this story of the clown whose wife goes off with another man, breaking his heart. He snaps and kills the wife and her boyfriend, and this short opera ends with the line: La commedia e finita...The show's over.

I looked at these circus performers and I saw all the RVS in the covered parking lot and I thought what a truly awful life. Town to town in drafty arenas, sleeping a midst traffic, animals and poor plumbing, depending on fast food. Up close the acrobats and everyone else were tired, worn, and thin. There was  a desperation, esp. from ringmaster" who was on the point of hysteria. (Two of my kids were scared) I don't criticize these circus members, I feel badly for them. There was joy and no fun in anything. That's okay, its three shows a day and there's not enough money in the world to pay someone  to be chipper and agile all that time. But the gritted teeth and the boredom were obvious. There was a  lousy dad and kids bicycle act complete with a 4 year old girl and an 8 year old boy (approx) I wanted to kidnap. None had the energy to be entertaining, the the heart of them had died out long ago.

Paglicacci is the same. In the opera they are traveling players in Italy around 1890. Town to town in a covered wagon. Four people. An unhappily  married couple . A surly assistant and a younger man. Nedda is the only girl handy to the three other men. She is lusted after but not loved, and she lusts for another man, a camp follower. A production of Pagliacci needs to recognize the irony and bitterness in Leoncavallo's jaunty music. He tells us the truth at the very beginning of the opera: The author wants to present a slice of life, the tears she are not false, they are not pretend!

I've seen very sumptuous stagings of Pagliacci. Extras galore, children running every where, fire eaters, acrobats having nothing to do with the story. This is an opera about exhaustion and despair. Nedda's affair with Silvio is the one glimmer of hope for anyone. And ii doesn't happen. Dirt, noise, drama, boredom and never ending performing. Like what I saw last Thursday. No love, no joy. La commedia e finita!
Posted by Christopher Purdy at 10:06 AM