A New Biography of Duke Ellington by Terry Teachout 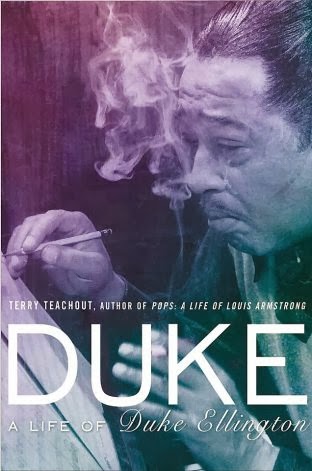 Edward Kennedy "Duke" Ellington (1899-1974) jazz pianist, composer, conductor and prophet is the subject of a new biography by Terry Teachout.

Teachout is the drama critic for The Wall Street Journal . He blogs about the arts at www.terryteachout.com.  His earlier biographies of George Balanchine and H.L. Mencken join Pops,  Teachout's book on Louis Armstrong, published in 2009.


Terry Teachout and I discussed Duke Ellington and Duke over the phone from his office in New York.

CP: Your previous biography, Pops is of Louis Armstrong. Did Armstrong and Ellington, who were close contemporaries, influence one another?

TT: No. Not really. Armstrong in one sense influenced everybody by his reconstruction of jazz rhythm, what it means to swing. That was a matter of changing the language of early jazz  itself. Remember that Ellington is slightly Armstrong's senior. He's already making records before Armstrong was widely known. They were aware of one another. They made  a wonderful album together in the 6os. But as far as one really influencing the other, no.

CP: Here's a wonderful quote from your book, I think from Billy Strayhorn: "Ellington plays the piano, but his real instrument is the band."

TT: Ellington was a good pianist and became a great one. By the 50s he 'd evolved into a remarkable soloist. But piano playing was never his best way of expressing himself. He expressed himself as a composer, in collaboration with members of his band. That didn't quite make him unique-there were other jazz composers in this period. But he was the greatest one. Ellington was the first one to use the big band as a medium for really serious musical expression....Ellington's was the first big band and he the firs composer who were more than just dance bands. They played concerts, they performed in vaudeville houses, movie theaters,  and concert halls. But above all they played Ellington's original compositions. Ellington was compared pretty early on and throughout his career to major composers. This was a time when the idea that jazz was an art form was in no way solidly established, not in America and not anywhere else. Then comes this extraordinary composer and his band and suddenly everyone says it is. In a way, outside of the value of the music itself, that's Ellington's major contribution. He played a key role in establishing the significance of jazz.

CP: You write that Ellington used the language of jazz to say what had never been said before. How did this make Duke Ellington different

TT: Early jazz was a functional music, dance music played purely for entertainment. It wasn't a complex. A soloist like Louis Armstrong is obviously making very complex music utterances, but they're in a very straightforward setting. Ellington is not writing abstract compositions. He saw himself as a musical painter, paining portraits of people and circumstances, the world around him. He's musically ambitious in a way that jazz composer up until then had not been. They saw themselves as entertainers. They were more than that, and Ellington was himself an entertainer. But he absolutely saw himself as a serious artist. He was very ambitious in his purpose as an artist, That was the difference between him and his contemporaries.

CP: Was Black, Brown and Beige his throwing down the gauntlet to become a concert artist?

TT: In a way, yes. He'd never performed in Carnegie Hall. The mere act of appearing there a a great point in his life, a great transition.  While he had dabbled in large-scale composition before Black Brown and Beige , he had only done it a few times. And BBB was vastly more ambitious. It's forty-five minutes long. It was much larger than anything he had written before, and really any jazz composer had written before. He was setting a very high bench mark for himself, performing that piece in that place at that time.


CP: By 1956, just prior to high appearance at the Newport Jazz Festival, Ellington was considered a "relic". What happened?

TT: After World War II the big band era, where big swing bands were the primary form of popular music in America came to an end, for economic reasons and social reasons. Most of those bands closed down.   The bands that continued to tour were having a harder and harder time.  Remember what was popular in 1956. That was the year that Elvis Presley became a star. Before that Frank Sinatra became a star. American popular music became dominated by singers. Then rock and roll came. You have Duke Ellington, a man born  in 1899, who has been leading a band since the 20s, and he's out there on the road but he's having a harder and harder time.  The band was declining in quality. Then comes this great opportunity to go to Newport and its as though he was galvanized at the chance. He pulled everything together, the band responded. After that, after all the acclaim that followed this performance -he got on the cover of Time-it was like a rocket that fired another stage. He was propelled into another phase of his life.

CP: "The Duke talked not to explain himself but to conceal himself".

TT: I wrote that. Ellington was an extraordinarily private man. In one sense every artist is, they don't want you to get too close. He led an extremely complicated private life.  He was estranged from his wife. He was,  too put it mildly, sexually active. He conducted himself in a way that no public figure in the 40 and 50s could get away with. He was a black man who among other relations had a long-term relationship with a white woman. It was important to him to keep his private life quiet because it was important to him to appear to be respectable. But I think beyond that beyond the simple need to keep his private life quiet,  this wa a man who lived in public. He spent his life on the road. He lived in hotel rooms. He used to say he only went home to get his mail. And yet he's out there composing.  He's doing the work of a very serous artist in very adverse circumstances. A person like that has to create for himself a zone of privacy and security in order to function.  I think that had a lot to do with the fact that Ellington was a man who liked to talk in circles. You could interview him for an hour and till get nothing from him. It may sound wonderful written down, but you realize he hadn't told you anything. It was because he had to preserve the mystery that I think is at the heart of every creative artist.

CP: What is the music that best describes Duke Ellington


TT: My favorite track is Koko which wa recorded in 1940. I think also any version of Mood Indigo, which was his first great popular hit, the one that sums up another side of his musical expression. Those two, I think will do ya.
Posted by Christopher Purdy at 1:52 PM