Andre Dubus III: A Writer with Fantastic Reviews and a Great Heart 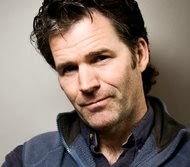 Andre Dubus III, now in his fifties,  is the son of Andre Dubus (1936-1999) who was a master of fiction short and long.  Andre III is certainly no stranger to success. His novels include House of Sand and Fog and The Garden of Last Days.  His memoir, Townie will curl your underwear and break your heart.

Dubus III's new collection of novellas ('novellini) is Dirty Love,   a must read for anyone who enjoys good fiction.

Andre was kind enough to agree to a phone interview from his home in Massachusetts. You gotta love a guy who is an internationally acclaimed author who talks with you  "just come in from putting a roof on my shed" and trying to make himself a cup of coffee...spills and all. 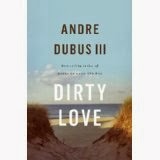 Books last Sunday,  in a very laudatory review calls it "a new and staggeringly good collection." Tell me your pros and cons of working in the short story form.

AD3: I don't think it's my natural form. It certainly was my father's, who was a great short story writer. I tend to go on and on. Novels seem to be more my natural canvas. What I love about the novella form , first of all I love what Faulkner said. "When the writer first tries his hand, he tries poetry. When he fails at that he tries the short story. When he can't do that either he ends up writing novels. " I think what he means is that the novel is a much more forgiving form. The shorter it is, the harder it is. It's not nearly as forgiving . We've all read 500 page novels that are great . But they could lose 200 pages , but they still are great books.

You can't have that in a short story. Every word really has to be the right word, every scene has to be the right scene. It has to be placed in the right order. That's some of the larger challenges of the shoter form. Also, what I love about it, especially the novella , 75 or 100 pages, that's like sitting and watching a 90 minute or 2 hour movie. You can sit down. But as you know the emotional truth is the hardest to writen after dinner, or in a char with your tea, and you can have the whole experience in one sitting before bed. I think that's pretty cool.

CP: Where did you get your eye for detail?

AD3: Beats the hell outta me.
I write slowly, I report back what people see, what they're smelling, what they're hearing and what's making them think and feel. It's really the way I think myself into their varied stories

CP: I've always thought everything in your fiction rings true. Then I read Townie and realized everthing is true! Tha'ts a memoir, not ficiton, but must have been devastating to write while supplying you with ideas for fiction.

AD3: Yeah. Any memoir writer after A Million Little Pieces is really careful not to flub anyting. I try to be very accurate about everything I remembed. Then I'd check it out and corroborate things with friends. Like my buddy Bill who's Sam in the book . "Buddy that was a Trans Am we threw in the lake wasn't it? Was it Schlitz Tall Boys we were drinking?" that kind of thing...I think you need to be honestly naked but emotive and fair to others

CP: You had a very difficult life when you were young. Was it hard to go back there?

AD3 No. For years I tried to write the stuff in Townie as fiction. And it just wouldn't come. I try to leave my own life behind when I'm writing fiction. Frankly, I have more fun when I do.

This whole memoir came out of my taking my sons to baseball , and I remember thinking how come I didn't play baseball? The hardest part of writing Townie was not my own life and my own pain and my own darkenss. There was enough distance from that. It was writing about my famuily that was the hardest. Writing about my father when he wasn't there to defend himself . That was the hardest part.


CP: Here you are a successful writer with a family and a great life. How did that happen?

AD3:  I'm one of these secular humanist types who prays every day. I have a hard time believing in a God but I pray every day. I started praying when we had our first child twenty-one years ago. We have three kids. And really, there's got to be some divine hand behind everything.

One thing I've learned. Having gone from a sedentary, depressed, scared kid to an athlectic, hard, disciplined kid, I learned some valuable lessons.  I learned that you can change your life. I learned that you can acutally go from dark to light, through your own actions. Just the discipline of changing myself from soft to hard, and from passive to active, it creates a thousand litle changes. Every day these add up to a life.
I can't take all the credit. I'm very aware tha there are larger, mysterious forces helping us. I have no idea what they are but I do sense them out there.

CP: Your characters in Dirty Love and in your other work live very hard lives .They have a lot of challenges. Do you have hope for them?

AD3: Yeah! A friend of mine , this  tough lady from Lynn, Massachusetts , which is a really tough town,  has this great expression. "Y'know honey, nobody gets outta here alive!"

CP: Jim Morison said that, too

AD3: I love that! I think its hard for everybody. I'm always a little surprised when someone talks about these characters being flawed or having hard lives, they just looks like all the people I know~!

CP:  I didn't find them flawed--I'm fascinated the character of e overweight young woman , she finally meets a guy who loves her and who is good to her--but he's boring! He's a neat freak. And she wonders if she's better off alone. But I'm read that and saying "Be careful honey, he may be your only shot...
I like the fact that in the end she thought she might be happier on her own.

AD3:  I was really wrestling with couple-dom three. This pressure to stay in a couple just so you're in one. It's not always the best choice for us as individual souls. I have a lot of hope for these characters. I have hope in everybody. I tend to be haunted on a personal and maybe artistic level by how wrongly things can go in life. But frankly that's' where good stoies lie .  A lot of us do get out of one tough mess and then we have a good stretch and then another tough mess, and that's just part of life. .

There's a wonderful line from the French writer Leon Blum who said, "Man has places in is heart which do not yet exist. Into them enters suffering in order that they may have existence."

People who have suffered and come through the other side, their hearts are larger and they end to have psychological and emotional and spiritual muscles that will serve them and frankly others later  in times of crisis. If you look at the word crisis in Chinese , its two characters...anger and opportunity.

CP: I think too that people often don't have a choice. They have to live and get on with it it. I think that can be helpful

AD3:: I think so, too. We have to survive. I do think -I really try never to inject a philosophical stance in my stoires. I really just try to be these people and live their lives and see where they go-I do thnik that Amercian culture , we kind of whine quite a bit. I think we're fairly immature. I'm not say this of individual people, -the country's full of hard working, good people, but as a culture, I think that whole life, liberty, pursuit of happiness  has done a number on us. I think the older cultures we all come from know better. Life, liberty and surviving the best you can. I don't think life is about being happy.

It's about striving, and growing and trying to live an authentic life. When you do that, you have moments of great joy but also momentst of great darkness, but that's part of being alive.

CP: Were you writing professionally when your father was alive?

AD3:  I was, yes, for years. My dad was really generous with me. He was generous with all young writers. He got to see my fist two books published. My third book, the one that put me on the map was a novel called "House of Sand and Fog" . He read that in manuscript and he read the first two or three reviews . He died two days after it came out in hard over . He actually predicted when the read the manuscript that it would be a finalist for the national book award. Six months later, he died, and and six months later, on my mother's birthday, they called......

For those who love great memoir, this is hard to put down. Visceral, sensual, a powerful view into powerlessness, rage, abandonment, redemption, forgiveness. His recollections on how he found his voice through writing are beautifully conveyed.