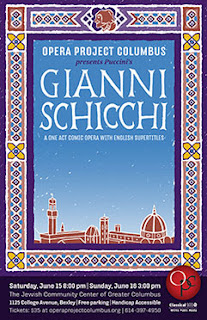 
Second staging rehearsal last night, in a different church basement (my church)  Not as fancy as before, and I had to collapse a boatload of tables and chairs to make room and haul the upright out of storage, but once set up we were good to go. I need to work on the disconnect between who's been cast to do what. Two roles still open. Spinelocio the doctor arrived late last night-a surprise to me and maybe to him as well. I wonder if Spineloccio can also sing the Notary.

I hope I remember correctly that we will have more space to spread out in the theater than I have approximated in these church basements. Things are looking bunched up so far, but I'm confident that in the one night we have to rehearse in the theater I'll come up with attractive stage pictures. This is certainly an attractive cast. They catch on pretty quickly and they all remember the moves better than I do. That's the chore of being 25 years older than most of these good people. Thank God I'm getting out of the habit of calling them 'kids'

So far I haven't been able to dig in to characterizations. I've spoken in general terms...Lauretta=Princess, Rinuccio=nice music but he's as nasty as his relatives (our tenor is such a nice guy I'm going to give him lessons in being an asshole) I haven't so far come up with enough for Nella, Ciesca, Gherardo, Marco and Betto. Gherardo is whipped; Nella is a shrew and it would be fun to spike up a little bitch competition between Nella and Zita. The latter's music I feel illustrates her nicely. I do want to avoid the old harridan stereotype. That's why I have Zita, Nella and Ciesca sexing up Gianni-and enjoying it-as they undress him and put him to bed. Oh, damn...we don't have a letto. We have a sedia. We're also going to have a problem if the stage platforms don't work out. Not that our conductor's backside isn't charming I'm sure but that's not what the audiences is paying for.

There was an extended music rehearsal last night. I had forgotten how few rehearsals have been available thus far. This is a difficult score. It's 80% ensembles.

There's a lot of idiomatic Italian. (I'm wondering if we shoulda done in this in English...what with the attractive cast and the audience...Still in this world of titles our singers will never be asked to sing this in English)
I don't know if we'll have more than one orchestra rehearsal. Our pianist/conductor last night is another fine musician. He's really brilliant. He's down extensive work in this repertoire. I sat in on the music with nothing to do myself and learned a great deal.

I've been wondering about the world premiere of Gianni Schicchi. Not the facts of it which I already know. But how it looked and sounded. Only one  of the principal singers in any of the the three Trittico operas recorded music from these works. There's no original cast Senza mamma from Geraldine Farrar; No Nulla! Silenzio! from Giuseppe de Luca...nothing of "E ben altro mio sogno with Giulo Crimi and the divine Claudia Muzio.

Muzio (1887-1937) is the one soprano other sopranos adored. She had a dark, haunting voice and was a reserved, melancholy figure. Diva Magda Olivero, now 103,  insists that Muzio "took poison" to end her own life. It is said she was broke at the end, and borrowed money from the Mafia to make the recordings for which she is best remembered today.

Florence Easton  (1882-1955) was the first Lauretta. She was a British soprano who sang Mozart, Puccini, Verdi and a great deal of Wagner. It's curious casting a Wagner soprano as Lauretta. Easton was a a good looking woman but hardly the petite soubrette type. She was a valued artist who never attained real stardom. It may be she was given Lauretta as a reward for distinguished service. That said, she's very impressive, and must have been a fine musician. She made the one 'original cast' recording"


Tenor Giulio Crimi (1885-1939) created  Luigi in Il tabarro and our buddy Rinuccio.  He made his debut at the Met in Aida one month before the Trittico premiere. The New York Times recorded a "thunderous ovation" for Crimi's Radames. He was the teacher of Tito Gobbi.

Giuseppe de Luca, the first Michele and Schicchi, was such a great artist I am going to save him for the next post.

Music rehearsal this Saturday. Next staging rehearsal next Tuesday.
Posted by Christopher Purdy at 10:28 AM