Queen Victoria Gets Chummy with Mendelssohn

The Columbus Symphony presents Mendelssohn's Symphony no. 3 "Scottish" this weekend, along with Beethoven's Piano concerto no. 4 and Kenneth Frazelle's Elegy for Strings-this weekend at the Ohio Theater. Jeffrey Kahane is the pianist and conductor.

Composer Kenneth Frazelle promises me a phone conversation later today.  I'll report back tomorrow.
In listening to and researching the Mendelssohn Symphony, I came across some delightful references to Queen Victoria and Prince Albert's fascnianton with this young German melodist.

Victoria and Albert bonded over music and her sexual passion for the dashing German princeling. Let's stay with music for now. The Queen loved her Bellini and Meyerbeer. She thrilled to Norma and I Puritani. No doubt she too sighed over Bellini, a lovely young man, most fetching and dead at 34. The Queen did love her dead friends. Albert was a respectable pianist and organist. He and the royal Mrs. were known to play piano four hands and Her Majesty was often most graciously pleased to sign. Withal, both Queen and Prince loved music, showed some gifts in performance. Aside from Albert and music, the Queen also adored Scotland. "Home of oatcakes and sulphur" Disraeli was heard to moan. As The Queen spent more and more time in seclusion at Balmoral, all of her ministers were forced to make the chilly trek north to conduct business.

Felix Mendelssohn (1809-1847) became a star at 17 with his overture to A Midsummer Night's Dream. His Songs Without Words were all the rage. The early string symphonies were considered decorative and good fun. Mendelssohn's four Symphonies lack the drama and passion of Beethoven or Schumann, but they have a grace and melodic perfection all their own.

During a visit to Scotland in 1829, the young was impressed by the ruins of the chapel at Holyrood House-once the home of Mary, Queen of Scots. The sight of that unhappy lady's home in the moonlight led Mendelssohn to jot down a tune. Over years this blossomed into his third symphony. And why not call it 'Scottish'. "I have come up with the theme for my Scotch Symphony", wrote Mendelssohn. Indeed he had, even though thirteen years passed until the Symphony was ready. But it begins with that haunting tune, inspired by ruins in the moonlight:

So here we have Mendelssohn: handsome, German and purportedly in love with Scotland. How could Victoria resist? She didn't. During one of his many trips to Britain, the composer was invited to Buckingham Palace. Many an eyebrow raised as court, since Mendelssohn was Jewish and a composer. Not exactly respectable, since composers were known to run with fast women and have a predilection for drink 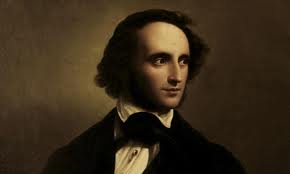 Mendelssohn's first visit to the Royal couple was on June 15, 1842. The Queen and the Prince were "quite fluttery" anticipating Mendelssohn's arrival.  The Queen reported that Mendelssohn "was very pleasing and modest...At one moment he played the Austrian national anthem with one hand and Rule Britannia with the other. We were all filled with the greatest admiration. Poor Mendelssohn was quite exhausted when he was done playing."

Mendelssohn came back a month later. The queen decided to sing for the composer "She will sing you something by Gluck. Meanwhile, . the Princess of Gotha had come in and we all proceeded through the various rooms and corridors to the Queen's boudoir. There stood a piano and two enormous bird cages. The Duchess of Kent came in, and while they were all talking I rummaged through the music and found two songs of my own, which I asked her to sing in place of the Gluck.":

Mendelssohn and Queen Victoria reckoned without on of the Queen's favored pets:

"Just as we were about to begin, the Queen said 'But first we must get rid of the parrot, or he will scream louder than I can sing! Prince Albert rang the bell and the Prince of Gotha said 'I will take him out,'.  I came forward and said "Please allow me?' and lifted up the big cage and carried it to the astonished servants. "

Mendelssohn grit his teeth when Victoria chose to sing "Schoner und schoner schmuckt dich".  Mendelssohn could overlook the Queen singing D instead of D sharp but he pouted when admitting that this song was written not by himself but by another Mendelssohn, his sister Fanny.

"I gave him a little ring in remembrance" wrote the Queen. They met twice more, in 1844 and 1847. Albert heard the composer conduct Elijah in London and sent a signed copy of the program with a windy but admiring inscription. The one favor Mendelssohn asked, to visit the Royal children, further endeared him to the couple.

Felix Mendelssohn died on November 4, 1847. The Queen was "horrified, astounded and distressed" at this news. "We liked and esteemed the excellent man & looked up to & amp; esteemed the wonderful genius and the great mind, which I feel were too much for the frail and delicate body." 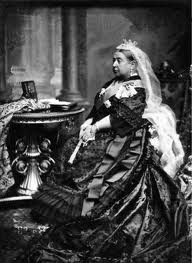 For all his vigor in fathering nine children, Albert himself was frail. He did in 1861. Victoria was prostrate and claimed she would soon join him, so weak and heartsick was she. Forty years later-she did!
Posted by Christopher Purdy at 10:53 AM