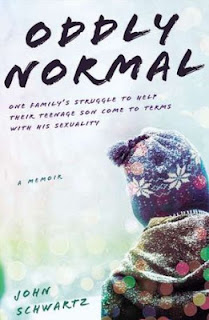 John Schwartz is a writer for the New York Times.
He's the author of a new book called Oddly Normal: One family's struggle to help their teenage son come to terms with his sexuality.

I think every parent should read this book. Lessons learned include keeping a marriage strong in the face of problems, and stopping at nothing-nothing-to help your kid.

Joe was thought to have OCD, ACD, and every other damned D. Some teachers were stumped and some were hostile. Some were kind. Joe was tested and IEP-ed and shamed and rescued by his parents and his own fortitude. A pink boa helped.

The book begins when young Joseph Schwartz attempts suicide at age 13. Being a gay kid at school, with a long devotion to pink boas and Barbie does not make him friends. The bullying became unbearable. Something had to change. Joseph had to grow into peace and acceptance, and this book is the story of the road leading him to a productive happy life. (Yes, the book has a happy ending.)

The Schwartz family has two older children, Elizabeth and Sam. Their mother Jeanne is the ferocious warrior of this book, the heroine of the story as all mothers deserve to be.

Read Oddly Normal. It's great for any parent for any reason...and their friends. Pages 243 to 268 eill change your life!

Yesterday I spoke with Joseph Schwartz from his office in Hew York:

JS:: I've had many man e mails from parents. Its a real testament to how difficult child rearing is. Parents say, my kid isn't gay but this is my kid. Any kid who is different , but especially the parents of gay kids have sen so much of this,  so much of the kid's self-directed bullying...

JS: Right! "Ain't I got enough problems?"  Remember that a kid at thirteen, what you really want is to be like everybody else, and then you come up with these differences, and especially this big one . It can create a very pervasive feeling of isolation.

CP:: Your book is called Oddly Normal. The book opens with something terrible, a suicide attempt by a 13 year old, but there is a happy ending to the book. I hope that's still true?

JS:  Absolutely. The story's not over. Every day is interesting. But things are so much better than they were.   We've come such a long way and that's really the point of the book.  Its about the 'getting better' part.

CP: You have two older children, Elizabeth and Sam.  You describe Sam as all-boy. He's a jock, he's tough, he's outgoing, What was the effect on them when this was going on with their kid brother.

JS:: They're great kids. They've got gay friends. It didn't matter to them that Joe turned out to be gay. The only reaction ...Sam's reaction was "Huh. OK."
Elizabeth's reaction was "So that's why he was always stealing my jewelry...!

CP: In the book we meet Joseph as a young boy, and you went everywhere trying to get some answers. If you asked twenty- five people you'd get twenty- five different answers. That's what was so compelling in the book. The journey of finding out what was going on with him. Were you getting a lot of help?

JS:  We were trying to get help. Everybody contributed something but much of what they contributed wasn't useful.

CP: You discuss the possibility of a link between autism and homosexuality. This hasn't been proved at all but its the first time I heard of a possible connection

JS: It's something that seemed interesting. I had a friend at work who suggested this might be the case -someone who's son is on the spectrum and who she thought might turn out to be gay ...but nobody's got any numbers.

One of the People I asked is Steve Silberman who is writing what I think is going to be a terrific book called 'Neurotribes' , where he talks about different brains , different experiences, what's going on on the on the spectrum. He's very interested in gay issues  as well.  He said that he too had heard tantalizing ideas but he hasn't seen any research that lays this out.

CP:You write that Joseph was interested in "girl things" from the time he was a toddler. Did you get any flack from your peers or other parents   Did anyone say put him in Little League for God's sake.....

JS:: Not really. No. Luckily for us that was never an issue. People didn't want to seem to tell us how to live our lives. Or how to raise our kids. One of the very nice things about having your third kid as opposed to your first kid that you're not even paying attention to what people are saying any more. You barely remember the kid's name. By the time it the third kid you have fewer worries..and that's when life hands you something interesting. Right?

We really thought we had this thing down.

CP: You and your wife have to be exceptional parents because you weer taking
Joseph into a gay social center for teens in New York, you were doing everything you could to make him feel comfortable in the world. ... 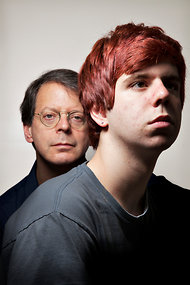 JS: It was essential that he know -he over arching feeling he expressed to us was he just felt alone. He felt he was going to die alone. He felt he was just going to be weird. We had to show him he wasn't weird. We sent him to theater camp. Look,  we told him, its no big deal to be gay here. Then we went tot he gay center in New York. They have these amazing youth programs. He got to see kids who have been through  a lot but who were warm, open, inviting . He saw that he's part of a range . There's not just one way to be gay. There's not just one type of gay. It can be a community.and an identity. Part of who he is. Bit by bit, Joseph relaxed..

CP: All of this must have been hard on your marriage

JS:: We felt it strengthened us. We know plenty of peoples who have had problems with their kids, and its driven them apart. We were looking at what felt like a hostile world, and we had to stick together. We had different roles. I was the good cop, Jeanne was more the bad cop. We were on the same force.

CP:: What has the journey of the book been with Joseph?

JS: Of course I would not have even proposed the book if Joe hadn't given me his approval. We talked about it.. I told him I think it would help people,  and he said yeah you should do that.  I replied I want you to really consider it. This will not be a totally happy book for you. I'm going to talk about the pills. I'm going to talk about the hospital. And Joe replied..I said, do it!

It was also the statement of a kid who like so may of his peers  is on facebook, and who talks about his life. Its the comment of a kid who father is a journalist , who has written about his kids in the past. His older brother and sister especially grew up with the occasional first person story talking about something they've done. Whether its Sam being on a losing football team, or his college work as a nude art model!

The point is that Joe had seen me talk about the family before. He's part of a movement of the kids at the center where they talk about what they've been through to help each other. He saw this as part of that tradition. He knew what the book was going to say. I showed him the manuscript. We talked abut his complaints and how to address them. He helped me revise the book to reflect his views  He partnered all the way through.

As I was turning the manuscript in he sends me n e mail -he says, I wrote this ridiculously adorable story  for a class assignment. It's a children's book called Leo, the Oddly Normal Boy. It's about a little boy who likes other boys and who gathers up some flowers and some chocolate and writes a poem and presents it all to another boy. And what happens after that.

Its a wonderful story. It made me cry....

CP: I must tell you that I passed that around the office here and everybody cried.

JS: That's now the last chapter of the book .

So how's Joe doing with the book? Joe helped write the book. Joe is the book. He's proud of that. At the same time its a little humbling for me to put in 800 words at the end of the book that do more than I was able to do with 60,000.

CP: Parents discover their kid is different in some way. They're angry, they're pissed off.  they're scared, what do you tell them?

JS:: I tell them the only piece of parenting advice I've ever heard that's worth the words , and that is what Dr. Spock told us in his child care book many,  many years ago. Trust yourself.  You know more than you think you do.

Posted by Christopher Purdy at 2:29 PM