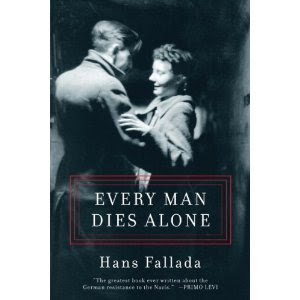 This remarkable, disturbing, upsetting book puts you right down in the middle of Nazi Germany and in an almost unforgiving way it keeps you there. Every word of that horrible time rings true in this novel, more than any documentary film or Hollywood treatment or grainy footage of marching soldiers and little men with big salutes ever could. I'll say little else except to recommend this book, and to offer an excerpt:

In the course of his morning walk, which lasted from ten to eleven, Dr. Reichardt would sing to himself. Generally he confined himself to humming softly, because a lot of the warders wouldn't allow it, and Quangel got used to listening to his humming. Whatever his poor opinion of music, he did notice its effect on him. Sometimes it made him feel strong and brave enough to endure any fate, and then Reichardt would say "Beethoven". Sometimes it made him feel bafflingly lighthearted and cheerful, which he had never been in his life, and then Reichardt would say, "Mozart", and Quangel would forget all about his worries. And sometimes the sounds emanating from the doctor were dark and heavy,and Quangel would feel a pain in the chest, and it would be as though he was a little boy again siting in church with his mother, with something grand, the whole of life ahead of him, and then Reichardt would say, "Johann Sebastian Bach."