The Met's Tosca...so what did you think? 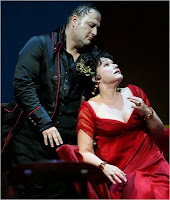 Whole lotta brouhaha and gnashing of teeth over the Metropolitan Opera's new staging of Puccini's "Tosca", which made its way internationally last Saturday via the Met's first HD transmission of the season. "Forty one countries, one thousand theaters" trumpeted the Met's Peter Gelb, a media maven who has been capo di tutti capi at Broadway and 63rd St. for the past three? four? seasons. Gelb promises a new way to look at and experience opera and boy-o he wasn't kidding. The HD presentations are terrific. I've seen most of them. I may not have liked everything I saw and heard but its fun to be onstage with the caked make- up and heaving bosoms. The HD experience, like opera titles a generation ago, is here to stay. More people are hearing more opera.

You could argue whether or not more people are hearing better opera. I suspect Gelb knew what he was doing is producing a de- constructionist Tosca that did without the candelabras and crucifixes attributed to Sarah Bernhardt and Victorien Sardou (in that order). And if you are going to replace Franco Zeffirelli's gargantuan, realistic Roman sets (I loved them. I loved that staging) in the midst of a horrible recession you are going to use a lot of bare brick walls and turrets and some faux-contemporary furniture in primary colors.

Conductor Joseph Colaneri led a big boy interpretation-loud, and swept up and with an occasional Brucknerian fatness that I loved. Colaneri is one of those very gifted maestri you can count on both to do it up right and to add a few touches-the Act I love duets were slower than I'm used to, but also sounded sexier. It was hot. Colaneri can do slow in this opera without dropping the dramatic thread. That's an accomplishment.

The Met cast three charismatic singers, requirement one for Tosca. Look, go ahead and laugh but I've always maintained that the soprano singing Tosca can be an adequate singer is she is a sensational actress. Karita Mattila, lacking the Mediterranean warmth and fatness mid voice (no body fat on her by he way...she's stunning) nevertheless spared herself nothing vocally. It's a bright, forward sound with just the bit of cut you need to ride the thick -blaring!-orchestra. She came off stage after Act 2 to be interviewed by the luscious Susan Graham and I was impressed at seeing how much the performance had taken out of her, while she was clearly eager and pumped to continue. And what's with no applause at Tosca's entrance? Are you kidding me? Forget the purists. Do we no longer buzz in anticipation of Tosca's entrance?

I've always loved Marcelo Alvarez's singing. The phrasing of recondita armonia was choppy. I was waiting for the silken line of a Bjoerling or Pavarotti but Marcelito wanted to pump out the sound and he certainly did. Cavaradossi, unlike Tosca can be as charismatic as hell but he better be able to sing, sing, sing and Alvarez delivered. And I liked Georgi Gagnidze, the Scarpia in spite of a few Snidley Whiplash grimaces up on the big screen. The costumes were attractive but suggested nothing as to period, and Alvarez has quite a fanny on him that even the dark clothes couldn't hide. The Met has no girdles?

Yes, people have been whining about the Act 2 blow job with Scarpia in flagrante-his vicious isolation is a part of the story, this man wouldn't resort to tarts-and about Tosca taking to the couch to fan herself slowly after murdering Scarpia-with a knife- thrust to the cojones, yet. The great tension and anguish of the scene fell off a cliff. And the final jump took too long-Puccini's music indicates the horror of the opera's last ninety seconds-the staging had us waiting around for a 2 second look at an affect. Still, Luc Bondy clearly didn't rely on sets or costumes to tell the story, and he kept our attention on the principals. That's quite an accomplishment. Even the current Met dares not put lasers into 19th century Rome--there were strobe lights.

It's a new day. Gelb is hiring Luc Bondy to crate buzz and if its negative buzz that's fine, maybe better. The boos on Tosca's opening night (stupid) made the evening news. Even Brian Williams talked about it !
Posted by Christopher Purdy at 8:02 AM

It wasn't nearly as bad as I expected! I may not have agreed with all of Mattila's acting choices, but she certainly made me believe in her commitment to those choices. I just don't think her lie-down on the sofa fits the music. Similarly with Scarpia--I only wish he hadn't reminded me of Batman's foe The Penguin. The tenor was irresistible, one of those natural "born to sing" performers, although his acting style is somewhat less continental modern and more traditional Italian than the rest of the cast. Kudos to the best Angelotti ever.