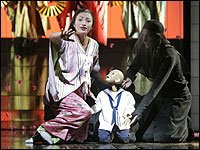 Last week the Metropolitan Opera shared its production of Puccini's Madam Butterfly to the world, via a live HD presentation beamed into cinemas. I saw it in Worthington, Ohio. The staging by the late Anthony Minghella's (I've resisted headlining this "Minghella's Butterfly") has been admired except for one point. Butterfly's child, Dolore (Sorrow) is played by a puppet...dressed in a sailor suit, the size of a three year old, manipulated by three onstage puppeteers. The concept was greeted with hoots of dismay on all the opera yakky boards before and after the premiere.

I don't know how the puppet 'reads' in the far spaces of the Met, but I was heartbroken. I thought the puppet was terrific. I focused completely on Butterfly's tragedy. Instead of waiting to see how the diva in question (the intense Patricia Racette)fared with the music, I saw her as a real character having to give up her child. I loved the use of space and color in the production-minimal sets-and felt Minghella kept the drama front and center. And the puppet was haunting. This production of Butterfly is one of the few Met shows now selling to the walls.
Posted by Christopher Purdy at 1:09 PM

I agree with you absolutely. The puppet seems to be quite sentient and sensitive. Racette was flabbersghastingly wonderful. This production may well be the most moving production of almost anything I have ever seen!

i bought my ticket for next wednesday's rebroadcast!