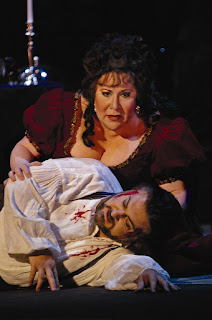 Aprile Millo performed Tosca in Cincinnati recently to packed and enthusiastic houses. Since her debut in New York in 1984, Millo has sung 157 performances at the Metropolitan, always in the big girl Italian repertoire including: Aida, Trovatore, Un ballo in maschera, Andrea Chenier, Luisa Miller and Tosca. There was a falling off of appearances in the mid 1990s but lately Millo has triumphed at Carnegie Hall in concert performances of La Gioconda, Adriana Lecourvreur and The Girl of the Golden West. Twenty years ago she was resolutely touted by press and public as the new-last member of the old school style of Italian singing. Her Met performances are rare these days, but they always attract the full houses and the "buzz" one heard on nights Tebaldi was singing. We spoke on June 20, 2006

AM: They heard exalted Broadway...

AM: And I told them, well she's in heaven but you'll hear Millo

CP: When you open a score to Tosca or Trovatore and you look at this character, and you learn the words and the notes, then what?

AM: Well, that's saying a mouthful, because the score is the blueprint for humanity. Not only of the composer but of the character that you're singing. There was a wonderful interview years ago where the great Maria callas said, you look at something with a straight jacket. That's a wonderful expression. You do it exactly as it is written. In the hands of a great master, it generally is exactly the character's state of mind. So you try it first very stiff, very ...exactly as written. Then of course, inperceptively your own personality is going to find resonance with what you're hearing and what you're saying, and then it takes off from there.

CP: And that must happen, right? Your own personality to some extent must get in there?

AM: Well, I think that's the only salvation at all, because if you look at how many great singers have already sung this music, the best has already been done in my mind. All you can bring to it in all humility is your soul, and how it will color that particular kind of music.

CP: And what about the people to whom and with whom you are singing? The people on stage? What do you need from them?

AM: I wouldn't dream of naming names! What I hope for on stage is a feeling of religiosity for the music. That it isn't something where you wear leisure suits to come to rehearsal. I am sort of young enough to have been a bridge to the old school, like with Bergonzi, with Fiorenza Cossotto, and then with the younger older school, with Domingo and Pavarotti, and now of course the current stars. And you look at them and you say, My God, no one used to come to an opera house without being fully dressed suit and tie.

CP: It must be seen as being very important to you, what you are doing

AM: ..what they are trying to reduce opera today to is exalted Broadway.
There's absolutely nothing wrong with Broadway. The kind of Broadway I would have preferred, I was too young to have seen was Mary Martin and Ethel Merman...Gertrude Lawrence, or something of subtlety and beauty that used the natural voice to project. What we're finding in opera is that they want that same thing now. They want the body looking perfect. The don't care if you can hear it, and I'm sure we'll be into miking before the end of the next fifty years, which will then deprive us of the last bastion of real, authentic sound. The way the oboe, the viola, the clarinet sounds, that is how you hear it in the theater. When the body, which is the human Stradivarius, is singing without amplification on stage is the last true human experience in so grand a setting.


CP: Do you have to decide who Tosca is? She lives in a specific time and there are historical persons and events mentioned and it's even supposed to take place at a specific date and place (Rome, June 15, 1800) Do you decide what kind of a person she is?

AM: I think Puccini decided it first. Then I try to wed myself as much as I can to what he asks for. But again, your own personality will peep through. I made sure that
I was always backed by people who lived closer to the time when it was written, like Magda Olivero or Renata Tebaldi.. I made sure to speak to these people to say look, in your experience would this be acceptable? Direct from the line of the composer, especially with Madame Olivero who actually actually know most of these people

CP: Do you remember the first time you heard operatic singing, live?

AM: It took my breath away. I remember exactly. It was listening to my mother and father singing the Cavalleria duet. And I kept thinking where did my mother and father go, because they were no longer themselves, they seemed to go into another world. My mother said oh,no that's just opera. When you are singing opera you go to another world. Later on in life whenever she would hear a piece of music, her face would leave and she would be in a sort of exalted state, like a trance. It sounds stuffy, but if you've ever seen a parent look at something with a sense of transfiguration, you want to know why.

And as I sing now I know exactly what my parents were talking about, I think it's a direct line to another world. Some people want to call it heaven, or another dimension. However you call it, it is a better and more beautiful world, and so now because I just lost Mom in June of last year and my Dad a few years ago, now when I sing I'm talking to them. It's my only time to be with them. Now, I'm truly gone!

CP: How do I get young singers to listen to the older recordings?

AM: I think you just have to expose them and I think the evening they're exposed has to be incredibly fun. People come to my performances because they know it's a free for all in the theater. People are cheering and stamping on walls..it's very exciting. Whereas if you come into the theater and you're taught like we are in the rest of life we're taught to not make a sound, to be adult children...don't speak unless you're spoken to...don't try to be original...but don't be yourself. So in a theater it's a victory in a way that a woman is singing over an eighty piece orchestra and you can hear her. Then, people go nuts! They're screaming and it's so exciting.

CP: Who are the singers who were your role models?

AM: No question, Claudia Muzio, a fabulous Italian soprano. No question Zinka Milanov. And of course my great friend Renata Tebaldi- and Rosa Ponselle without a doubt, an absolute God of vocality.

CP: What is your hope for opera in the future?

AM: That it doesn't sell out.

AM: That it doesn't try to be all things to all people. If you look at the Mona Lisa in a fantastic museum, she does not try to be The Last Supper. She does not try to be the Transfiguration in the Papal residence. She is what she is. You are ennobled by looking at her...there's an enigma, blah blah blah. What opera does not need to do is to make itself over. It is already very timely, it is already very accessible. It's big, it's grand, it's triumphant. It is a human being singing directly to you. And now they say they have to look like movies stars. No, they don't...What's annoying is that several of the ballerinas who are singing today, there's nothing wrong with it if you're up close, and ah yes, it's an intriguing smaller voice and how lovely and sometimes they do something with the text. Most times they don't. And so you say okay, okay, okay. If you're sitting further back what you notice is the annoyance in the audience that they can't hear! 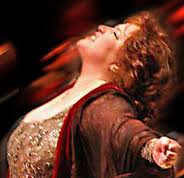 CP: And lastly, what is meant by style? The Italian style, the French style? Are these viable phrases today?

AM: Yes...for me when you sing in the French style you sing as a French person would speak with music. If you sing in the Italian you're singing an Italian thought which means you really have to know how they think...if it's a good composer they are going to express it to you in a particular kind of line, or utterance that is exactly how they speak. If you listen to the real Italian literature, a true Bellini phrase is very different from Verdi and Mozart. There's a longer, longer bow used in the bel canto; then it's transferred into what I call verismatic bel canto, which is Verdi, and then of course Puccini takes it further and it becomes absolute conversation. Through it all there's a sense of legato that is completely missing today. Completely missing! ...I heard recently at a very highly touted evening in which we were to be unbelievably blown away by some piece...but it had to have a bel canto phrasing. And you heard two or three notes and you thought oh good, good, good, they're going to go ..it's going to be magnificent. And then all of a sudden it got chopped, or they used a consonant to destroy the line. It doesn't have to be a robot, but it has to vibrate, like Fritz Kreisler on a violin. It has to breathe , it has to be elastic, but it does have to have the legato, and I think that's one of the great things missing today, is a sense of really beautiful expression within the sound.
We want an athlete on stage just throwing out high notes, but those notes are sometimes wed to emotion.

CP: And they're connected to other notes

CP : There's a whole string of pearls there in connecting the notes you want to go for. If anyone heard Callas sing Norma you know...

Aprile Millo sings Tosca, La Gioconda and Maadalena in Andrea Chenier at the Metropolitan Opera during the 2006-2007 season.
Posted by Christopher Purdy at 9:31 AM